Part I – How far apart are we?

In offices, factories, warehouses and every other place of work throughout the country, different generations work together by communicating with each other to achieve common goals. This ability to connect on a personal and professional basis is something fundamental to every individual and every business, yet in some people’s eyes it’s under threat as never before.

The reasons cited are invariably to do with the ways in which different generations communicate.  This usually manifests itself in complaints from baby boomers/Gen Z about “millennials not understanding that this is the way we do business” - a feeling often reciprocated by the millennials.

Despite the focus on the two groups, it’s not solely about pre-millennials and millennials and the gap between them. While such inter-generational gaps have always been with us, albeit brought into sharper focus by the (American) “invention” of the teenager in the 20th century, it’s not just one generation gap. The table below, taken from “careerplanner.com,” shows every generation that is still alive. 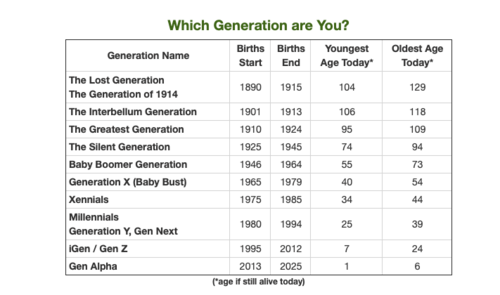 While there probably aren’t too many of the Lost Generation working in your office, there will certainly be a healthy mix of Gen X, Xennials / Millennials and a smattering of Gen Z.  Now I don’t know about you, but it seems to me that there is a lot of potential for inter-generational conflict there.  And a large part of the problem is not only that we don’t understand each other, but, unlike in the past, the modes of communication have changed.  Previously, we spoke face-to-face, or possibly called on a landline and / or wrote letters or sent a fax (has anyone under 40 seen a fax?).  But just 12 years ago, Steve Jobs introduced the world to the iPhone.  Only three or so years before that, Mark Zuckerberg and his mates came up with Facebook. We’ve now become addicted to our phones and social/multimedia in ways which have changed our behaviour, sometimes in ways which might not be good for us.  And one consequence of this is that the world has become far more communicative intra-generationally, yet in some respects far less communicative inter-generationally. Indeed, it’s not just the generations: such gaps also exist between industries and areas of employment, with some major organisations having their own preferred media platform(s). We can see this in the recent debate around the banning of pagers (and fax machines) in the NHS in the next few years, where, despite the government’s desire to bring things up-to-date, some established doctors stress the value of a piece of technology that most thought had died out a long time ago.

None of this should diminish the aforementioned importance of our being able to connect with everyone inside and outside our place of work on a personal and professional level, using whatever technology we prefer.  And given that good, simple and clear communication underpins every successful business, working out how to get your message across to all the different generations via all these different technologies is clearly vital – and will be the subject of Part II of this blog…